Our second meetup took place on Monday, March 20 at Info.nl. It was shortly after the Dutch national elections.

The agenda was as follows:

The group in attendance was a mix of people from agencies, higher education, NGOs, industry as well as some freelancers.

For some in attendance it was kind of scary to attend the first session. Because of uncertainty about what to expect or negative responses from friends and colleagues.

The diversity of viewpoints and backgrounds of the attendees was appreciated. The discussion was considered an open one. There was a shared sense of “let’s do something”.

A large part of the discussion was focused on understanding the causes of the current political climate, particularly the rise of populism. This was interesting and useful but did leave a lot of other subjects — except for a brief discussion of possible solutions — untouched.

Some people have been meeting up afterwards to follow up on ideas and things to do.

The shift to the right in terms of messaging appears to have benefited certain parties. Some of the big winners are also hostile to the rule of law. Luckily we have also seen good results for some progressive parties.

The high turnout is seen as a positive as well as the spread of votes across many parties. We have a pluralist and inclusive system.

Most parties seem to not have any new ideas for the future of our society. Many think in terms of old systems. Several participants are keen on ‘new’ approaches based on the commons, cooperatives, bottom-up, local civic participation.

Some of the major winners of the elections have argued things are fine and improving still, particularly economically. The group feels this might be true on average but it is pretty clear not everyone is sharing equally in these improved economic conditions. This undermines trust in the system.

Examples provided included the situation in the east of Groningen which suffers from economic malaise and population shrinkage, as well as the Overvecht neighbourhood in Utrecht which struggles with socio-economic problems and where Denk came in first and PVV third in the elections (in a city which otherwise favours progressive parties D66 and GL). 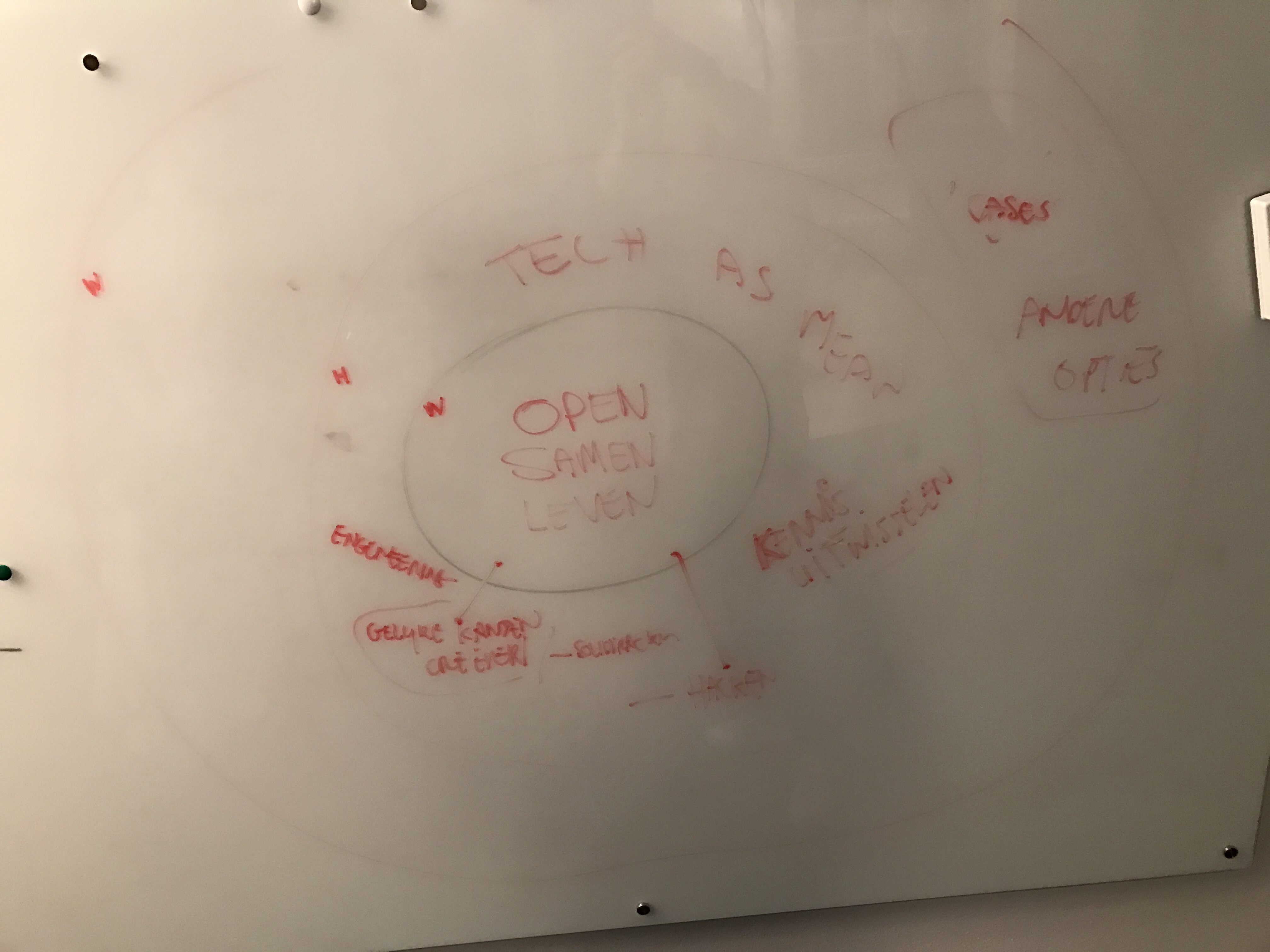 For this segment we decided to structure the discussion using Simon Sinek’s golden circle. Why / what / how?

To kick things off it is suggested we make the promotion of an open society our goal. Also equality, although people are considered equal by the law not everyone actually is.

An open society means we welcome newcomers, we value liberty. The French liberty, equality and brotherhood did not include safety. Maybe we should adopt the Amsterdam coat of arms as our motto: determined, heroic, compassionate.

Solidarity means a relaxed attitude towards the other. It is at odds with the current trend of scapegoating. We should strive towards taking away reasons for people to fear the other.

Our analysis is that in the Dutch context xenophobia is fuelled by zero-sum thinking and loss aversion. It isn’t always the case that those sceptical of migrants are the ones at the bottom of the economy. It includes the middle classes who are uncertain about their prospects and those of their children. Austerity has produced the notion that one person’s gain will come at the cost of others. This trend should be reversed and it appears to start with combating the notion of curtailing government debt.

So we should strive to rebuild trust in society and in doing so increase a sense of solidarity. Making sure the Dutch dream is for everyone.

Taking a tech perspective, the question could be: how do we engineer infrastructure for solidarity. We should not shy away from a strategic perspective and do some big picture thinking at this early stage of our existence.

An example given is how in Denmark they are dealing with job insecurity and the rise of flex work and the gig economy by shifting from job security to income security as a concept.

There are plenty of good examples like this around the world and it would help to collect and share them so that we educate ourselves on the possibilities.

A strategy for building towards new systems is to first create a space of experimentation and only start formalising things once they have solidified. To start out by hacking, basically.

The discussion shifts towards what Tech Solidarity NL itself should be. The website now says “nascent organisation” which some people felt was a bit premature. Is “organisation” too formal, maybe? On the other hand it does show a level of commitment.

Practically speaking we are now a group of people who come together to organise, educate and agitate. We can be a place which matches supply and demand. We can be a platform for experiments. Whatever we decide to do the “why” we will settle on should ground everything we do.

We finish by agreeing to continue the development of the shared purpose during the next meeting.

Someone suggests maybe structuring subsequent get-togethers by dedicating the first part to thinking and the second part to doing something.

We could also explore tools and other things we could provide to tech workers who want to do the right thing.

Another idea that is still worth exploring further is to match up NGOs who are working towards an open society with tech workers willing to help them out.

The session ends with attendees leaving newly energised to fight the good fight.